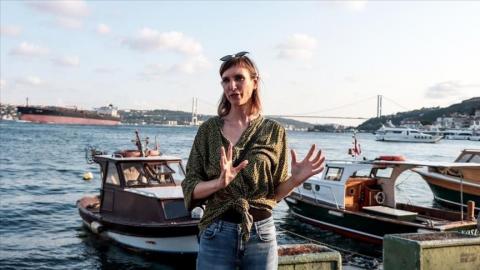 Thanks to its geography, Turkey enjoys a rich culinary culture, says a Hungarian chef who is introducing Turkish cuisine to the world with food tours of Istanbul.

Speaking to Anadolu Agency during her latest tour of Istanbul with a group of about 20 Hungarians, Agnes Toth expressed her admiration for Turkish cuisine and her love of Istanbul, the historic Ottoman capital and Turkey's commercial capital.

"By virtue of its geography, Turkey has an incredibly rich culinary culture," said Toth, who has been a culture and tourism ambassador between Turkey and Hungary for 15 years.

Saying how she first came to Turkey as a tourist 15 years ago, Toth noted, "I loved Turkish culture and language, and I decided to advance myself in these areas."

After honing Turkish recipes that she started to learn while picking up the Turkish language, with frequent visits to Istanbul, Toth continues to get training from Turkish chiefs on the local cuisine.

She noted that there were no good Turkish restaurants in Budapest and Hungarians knew little about Turkish cuisine besides meat doners and baklava dessert while she was studying in the city.

"I used to be constantly asked where to get good Turkish food in Budapest. Since there were no good Turkish restaurants to recommend in Budapest, I started bringing Hungarians to Turkey," she said.

Pointing out that Turkish and Hungarian cultures have similarities as well as differences,
Toth also highlighted some features that make Turkish cuisine rich.

"Each region is incredibly rich and different from each other," she said.

"The Aegean region and southeast are different from each other and have their own characteristics. That's why I can find anything in...