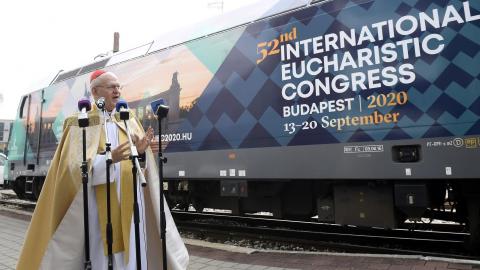 For others, however, the potential benefits far outweigh the risks. The tens of thousands of expected pilgrims will help revive an ailing tourism sector in Budapest and the event itself could boost Hungary's image abroad as a Christian country. It might also provide a welcome boost for Prime Minister Orban and President Janos Ader, who will both have a private audience with the pope on Sunday morning.

But that meeting with the prime minister was itself the subject of major controversy - something which helped underline the complicated relationship that Orban and his party have with religion in general and the Catholic Church in particular, and what part that might play in the outcome of the 2022 general election.

Pope Benedict XVI (R) poses with Hungary's Prime Minister Viktor Orban, his wife Aniko Levai and their five children during a private audience at The Vatican on December 6, 2010. EPA/ALBERTO PIZZOLI / POOL A pact with the church

In June, a report from a US Catholic news site, subsequently picked up by the Polish media, claimed Pope Francis was not intending to meet Orban during his visit to Hungary because of their conflicting views over refugees and migrants.

The report was later denied by both the Vatican and Hungarian Catholic Church, but by then some government supporters in the media had completely lost their heads and launched an unprecedented smear campaign against the pope, calling him a senile old fool and an anti-Christian, and accusing him of "humiliating" Hungary. They felt further aggrieved by the fact that Pope Francis would be spending only three hours in Hungary but three days in Slovakia.

Vatican diplomats tried in vain to explain that the two visits should not be compared: Pope...