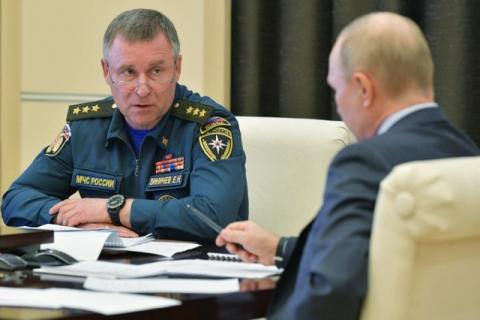 According to the first information, he died saving a man's life during interdepartmental exercises, reports Sputnik.
The information was also confirmed by the spokesman of the official Kremlin, Dmitry Peskov.
"The Russian Ministry of Emergency Situations sadly informs that Yevgeny Zinichev tragically died on duty while saving the life of a person during exercises within the protection of the Arctic zone in emergency situations," the ministry said in a statement.
As it is stated, the minister was standing on the edge of the abyss, when the cameraman slipped and fell. Zinichev immediately jumped off the rock in an attempt to save the man from the water, but he hit the rock and suffered severe injuries.
Both were hospitalized, but Zinichev died during the helicopter transport. Russian President Vladimir Putin expressed his deepest condolences today over the tragic death of Russian Minister of Emergency Situations Yevgeny Zinichev, Kremlin spokesman Dmitry Peskov said. Peskov told TASS that Zinichev's death was a "great loss".

News just in the death of Russian Emergencies Minister, Security council member Yevgeny Zinichev. Just hours ago he was inspecting new firefighting facilities in the Arctic city of Norilsk. No more details yet. pic.twitter.com/LVGGGnehte