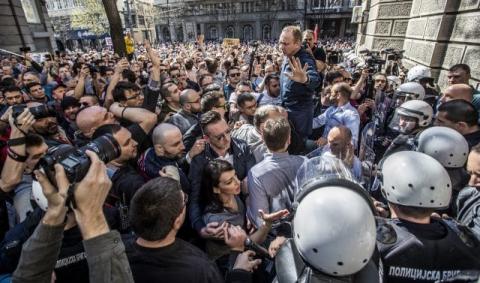 After EU parliamentarians' draft proposals to improve the fairness of elections in Serbia were leaked to media, the head of the Party of Freedom and Justice, former Belgrade mayor Dragan Djilas, said on Wednesday that his party will not agree to them.

"The proposal we received is not acceptable for the citizens of Serbia, because it does not contain clear mechanisms that would enable respect for the law, the implementation of which is necessary for us to have free elections," said Djilas, whose party is expected to be a leading opposition force at the next elections.

Serbian media on Tuesday evening published the draft proposals for improving the conduct of the 2022 general elections, which were sent to opposition parties and movements involved in ongoing dialogue with the ruling parties that is being mediated by the MEPs.

In the leaked draft document, whose authenticity has been confirmed to BIRN, the MEPs emphasise equal media representation and the integrity of the electoral process as the two key areas for reform.

The document calls for media in Serbia to report on the political programmes of all parties in an adequate manner.

Media are also asked to publish their tariffs for political advertising before the start of the campaign, while public service broadcasters are asked to provide equal representation to all political contenders.

In order to achieve equal media representation, the mediators from the European Parliament propose the adoption of new binding regulations for public service broadcasters, as well as the establishment of a temporary supervisory body consisting of members of Serbian Electronic Media Regulatory Authority and representatives proposed by the participants in the dialogue. The body would be...