Traditional Kyrgyz game continues to be played in Turkey’s east 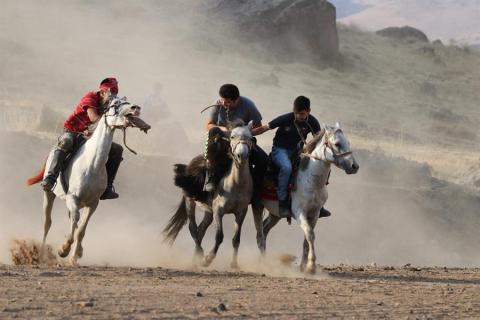 A traditional Kyrgyz horse game commonly likened to polo continues to be played in eastern Turkey.

Kök Börü is a synthesis of traditional practices, performances and the game itself.

It is played by two teams on horseback where players try to maneuver a goat's carcass or goat fur and score by putting it into the opponent's goal.

Kyrgyz Turks, who moved from the Pamir plateau in northern Afghanistan in the early 1980s to Erciş district in Turkey's eastern province of Van, want to pass the game on to future generations through the Kök Börü Sports Club they established with the support of the Van Governor's Office and Erçiş district head.

The sports club represents Turkey and promotes the game at various international tournaments it takes part in, particularly competitions around the Turkic world.

"We're making efforts to keep this traditional game, which is thousands of years old, alive," Mustafa Timur, the club's vice president, said in a statement.

Pointing to the cultural significance of the game, he reiterated that they want to pass it on to future generations.

Kök börü has been recognized by UNESCO's Representative List of the Intangible Cultural Heritage of Humanity in 2017.

The game is considered as "an expression of the cultural and historic tradition and spiritual identity of its practitioners and serves to unite communities regardless of social status, fostering a culture of teamwork, responsibility and respect" by UNESCO.

Afghan girl from famous cover portrait is evacuated to Italy