Blinken says Taliban legitimacy will have to be ’earned’ 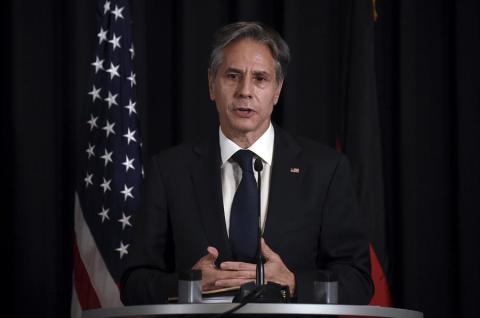 U.S. Secretary of State Antony Blinken warned on Sept. 8 that the Taliban would have to earn legitimacy from the world, after talks with allies on how to present a united front to the hardline new government in Afghanistan.

"The Taliban seek international legitimacy. Any legitimacy - any support - will have to be earned," Blinken told reporters at the U.S. air base in Ramstein, Germany, after leading a 20-nation ministerial virtual meeting on the Afghan crisis.

A senior State Department official said all countries were broadly on the same page on dealing with the Taliban caretaker government - including Pakistan, historically the insurgents' ally.

"Pakistan was there. They talked about their unique role, from their perspective... they certainly said that we're in a position where we have to engage to some degree," the official told reporters on Blinken's plane.

"But nothing along the lines of, we think we have to recognise or legitimise the government in the near term," he said.
The official said Washington has had no contact, even indirectly, with another key neighbour, Iran, on Afghanistan.

Iran has historically opposed the Taliban but developed relations as the United States, Tehran's arch-nemesis, carried out its withdrawal.

Pakistan's Foreign Minister Shah Mahmood Qureshi tweeted: "We must not allow creation of a political vacuum in Afghanistan leading to insecurity and instability.
"A stable & peaceful Afghanistan only be achieved through more, not less, regional & int'l engagement.
"Pakistan, as an immediate neighbour cannot afford to disengage," he said.