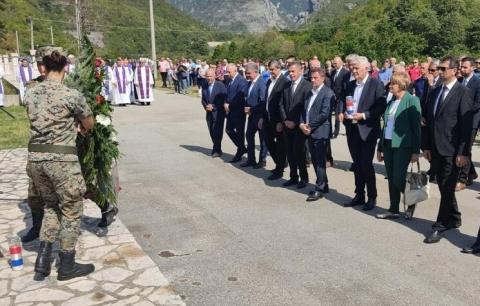 Mourners laid wreaths at a memorial to Croats killed during wartime and attended a Catholic mass on Thursday in Grabovica, near the town of Jablanica, to commemorate the 28th anniversary of the massacre in the village.

"We have been waiting for 28 years to find an easier way for us to remember all the sacrifices in Bosnia and Herzegovina, and particularly the Grabovica victims, in an appropriate and dignified way and not to have a constant trauma in their families," said Dragan Covic, the head of the Croatian Democratic Union Bosnia and Herzegovina party, as he attended the ceremony.

The massacre took place in September 1993, during the conflict between Bosniaks and Croats in the area.

Soldiers from the Bosniak-led Bosnian Army members entered the village and killed 33 civilians including a four-year-old girl and an 87-year-old man.

Josip Dreznjak, the head of the Grabovica 93 Association of Croat Victims, said that the perpetrator of the murder of four-year-old Mladenka Zadro and her mother is now free after serving his sentence.

"He said: 'Yes, I killed the mother and the girl while the mother was holding the girl in her arms.' Now when you look at this, he has served his sentence, today he is a free man, and the bodies have not yet been found," Dreznjak told BIRN ahead of Thursday's commemoration.

Dreznjak's parents and sister were among those who were killed, and their complete remains have not yet been found.

"It is not clear to us why this had to happen when we see that [the victims] were civilians, people who were powerless, the elderly, children, and that there were more women than men," he said.