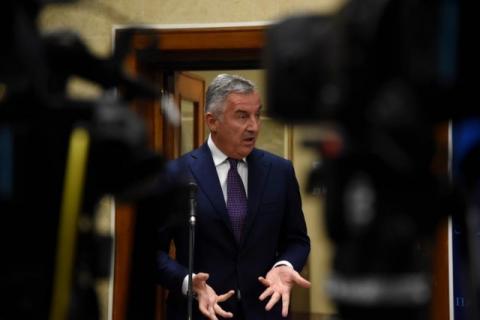 He pointed this out after a meeting with Apostolic Nuncio, monsignor Luigi Pezzuto.
He pointed out the concern for renewed retrograde ideas in the region and emphasized that Montenegro must defend itself with full awareness that the most important thing is to preserve peace, stability, interethnic and inter-religious harmony, RTCG reported.
"These are the greatest achievements of modern Montenegro, defended in the previous 30 years of temptations during which Montenegro served as a refuge for members of various religions and nations, which we consider a moral capital that we will not give up. In order to protect that, we must protect the state and I am sure that we will succeed", President of Montenegro said.
As it was announced, Djukanovic expressed high respect for the moral and spiritual reputation of the Holy See in the world and gratitude for the support that Pope Francis has sent to Montenegro and its people on several occasions.
The Apostolic Nuncio Pezzuto, with gratitude for the reception, expressed his understanding for the concern and reminded of a completely different social moment during the previous meeting of the two interlocutors.
He added that sometimes things need to be observed from a distance and that the help of the Vatican will certainly come, and said that he would inform the Vatican about what happened in Cetinje through an objective presentation of all parties, including the president's concerns.
"Be brave, because we always have to see how to move forward in spite of everyone and in spite of everything," Pezzuto said, the President's Office announced.