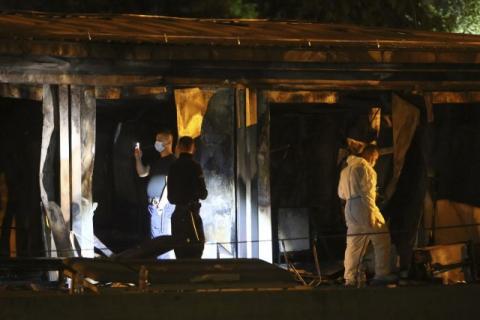 The fire, which broke out around 9 pm, was extinguished.
The bodies of the victims were transferred to the forensic center, and an investigation was launched, reports the Telma portal. There are also injured who were transferred to Skopje. Footage on social media shows the hospital building on fire and a thick cloud of black smoke rising into the air near the main road in Tetovo, adds the BBC. The fire was extinguished by seven fire trucks with the crew of 30 firefighters.
According to Telma, citing unnamed sources, the fire destroyed everything in front of it, even the metal water pipes, as well as one vehicle a few meters away from the hospital. Macedonian Minister of Health, Venko Filipe, was also on the spot.
On Twitter, Filipe expressed his deepest condolences to the families of the victims. "This is a very sad day," Filipce said, adding that several patients were rushed to a hospital in Skopje. Filipce described the fire as a "terrible accident", without giving details.
Macedonian Prime Minister Zoran Zaev also spoke about the accident, saying that the cause of the fire was an explosion and that an investigation was underway. He stated that the fire was extinguished, but that many lives were extinguished with it. He expressed his condolences to the families of the victims on Facebook and said that an investigation had been launched.

#Prayfortetovo The modular hospital in Tetovo is engulfed in fire, with casualties and injuries. 😢 May Allah have mercy on the dead and heal the wounded 🤲🏼 pic.twitter.com/4HlJkU4yV5

The hospital in Tetovo was built recently, and some irregularities were reported during its...

Bulgarian Foreign ministry Responds to Stance of N..Mascedonia on Rights of Bulgarians in North Macedonia