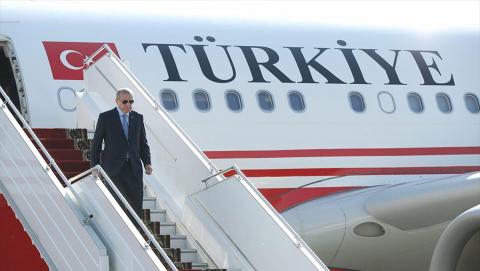 President Recep Tayyip Erdoğan is set to pay a four-day visit to the U.S. to attend the 76th session of the U.N. General Assembly, state-run Anadolu Agency has reported.

At the U.N. headquarters in New York, the president will address the General Assembly, which begins Sept. 14. Erdoğan is also set to inaugurate the 36-story Turkevi Center in Manhattan.

The crisis in Afghanistan after the Taliban takeover of the country remains the most important issue between Ankara and Washington for any possible meetings between Turkish and American officials on the sidelines of the U.N. General Assembly.

The two countries are seeking a solution to operate Kabul airport and prevent humanitarian tragedies and instability in the war-torn country.

In June, Ankara proposed to secure the Hamid Karzai International Airport in Kabul after the withdrawal of NATO forces. The United States and Turkey had negotiated the details to keep the airport open as a safe passage for diplomatic missions in Afghanistan. However, the Taliban refused the presence of foreign troops in the country.

Ankara and Washington, along with Qatar, continue discussions to maintain the operation of Kabul Airport over the necessity of technical support asked by the Taliban.

Erdoğan met President Joe Biden in Brussels on June 14 on the sidelines of the NATO summit, the first in-person meeting after the latter came to power in January, and the two agreed to use direct channels of dialogue effectively and regularly.