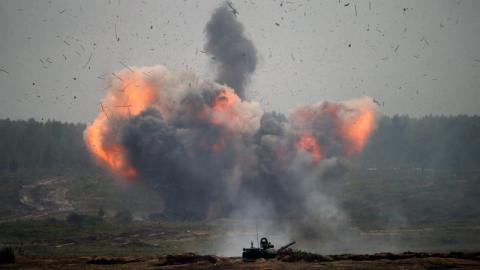 However, it comes in the context of an already tense situation on Belarus' borders with Poland and the Baltics, after weeks during which Aleksandr Lukashenko's regime has been pushing migrants, primarily from the Middle East and Afghanistan, into the EU, partly in retaliation for sanctions Brussels imposed on it for a rigged presidential election in 2020 and a subsequent violent crackdown on demonstrators.

The Polish government, which last week introduced a 30-day state of emergency in the area along its border with Belarus, explicitly referred to the Zapad exercise as one of the reasons for its move.

"A military exercise of such amplitude, involving such a large number of soldiers, could be connected to numerous provocations," Polish Prime Minister Mateusz Morawiecki told a press conference on September 6.

The Zapad 2021 exercise is indeed important, because of its size and timing in the context of Belarusian domestic politics and the migration crisis, explains security expert Anna Maria Dyner, a specialist on the Russian Federation and Belarus from the Polish Institute of International Affairs (PISM), a Polish governmental think tank.

However, the expert warns that spreading disinformation is also one of the techniques being honed during Zapad 2021, meaning Western actors, and the media in particular, should be cautious when reporting on the level of threat.

In an interview with BIRN, Dyner...