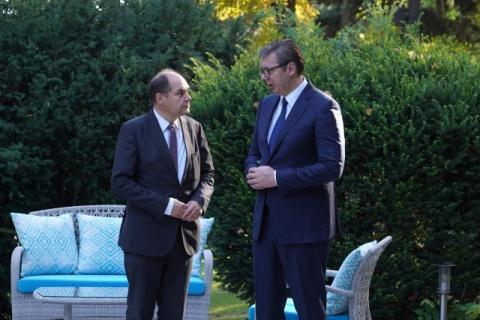 Vui and Schmidt met at the "Mir" villa, and it is expected that the two officials will discuss the situation in Bosnia-Herzegovina and overcoming the crisis that arose after the BiH Parliament adopted the Law on Ban of Genocide Denial, after which the representatives of Republika Srpska decided not to participate in the work of joint institutions.
Last week in Bled, where the Strategic Forum was held, President of Serbia announced that he would soon meet and hold talks with the new High Representative in Bosnia-Herzegovina, Christian Schmidt, with whom Republika Srpska institutions refuse to cooperate, explaining that he has no Security Council mandate.
Commenting on the request of the member of the Presidency of BiH, Sefik Dzaferovic, who called on Schmidt to replace Milorad Dodik due to the boycott of that institution, Vucic said "some people" cannot understand how "irresponsible, dangerous their behavior is and how they play with fire". He added that he was satisfied with Schmidt's reaction and that it was important that, as he said, he did not listen to "meaningless requests".
Earlier, after the BiH parliament passed the Law on Ban of Genocide Denial, Vui said that he would talk to Schmidt and openly tell him that he was completely against the application of the Bonn powers, that the decision of former High Representative Valentin Inzko was bad and that any action against Serb member of the BiH Presidency Milorad Dodik and Republika Srpska officials was disastrous in terms of stability in the region.
He pointed out that they understand Dodik and Republika Srpska, but also Schmidt's point of view, their positions, and that Serbia must have its own position. Vui said that Schmidt is an extremely intelligent man, who will be willing to...