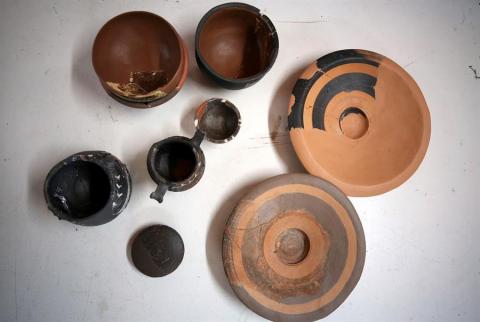 Ongoing excavations in Assos, which was one of the most important port cities in the ancient ages and home to many cultural riches such as an ancient theater, agora, necropolis and ramparts, have unearthed a 1,300-year-old iron machete and an ax used to shape wood.

Located within the borders of Behramkale village of Ayvacık district in the northwestern province of Çanakkale, the ancient city of Assos sheds light on the past with its richness on the ground as well as historical artifacts found underground during excavations.

New data have been obtained in the ancient city, where excavations have been carried out for nearly 40 years by Turkish academics.

Speaking to state-run Anadolu Agency, Çanakkale Onsekiz Mart University Department of Archeology lecturer and the head of Assos excavations, Professor Nurettin Arslan, said they were working on the Byzantine period, the last settlement era of Assos.

"The places we excavate are mainly buildings used as residences. The finds we found inside these structures, utensils and tools from the daily life of that age tell us about that period and what happened there. In this respect, this information is very important. However, it is very difficult to find utensils intact in such structures. By systematically digging, we are trying to reassemble these pieces like a puzzle with statistical and long-term studies," he said.

Arslan stated that one of the finds they found before was a grill made of terracotta.

"Today, this is one of the easiest methods of cooking meat. We see that people cooked meat on the barbecue or grill those days, too."

Arslan also reported that among the finds were pots...