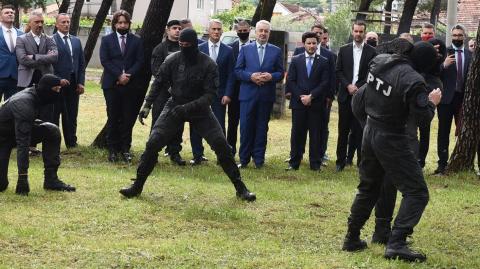 With four seats in parliament, Abramovic's civic Black on the White coalition is the smallest member of the 41-member ruling coalition, which has a majority of one in the 81-seat chamber.

The latest political crisis in the camp of the ruling majority came after violent protests rocked Cetinje, the old royal capital of Montenegro, last Sunday, as opposition supporters and self-declared patriotic groups clashed with police, trying to stop the enthronement of a new Serbian Orthodox Church Metropolitan.

While police used tear gas to disperse protesters and remove the roadblocks that had been erected near Cetinje, Serbian Orthodox Patriarch Porfirije and the new Metropolitan, Joanikije, had to be transported to Cetinje by army helicopters.

The protesters claimed the location of the inauguration in Cetinje was an insult to Montenegro's struggle for sovereignty and independence from Serbia, to which it was united from the end of World War I until 2006.

Abazovic issued his threat after PM Zdravko Krivokapic accused the Interior Minister and chief of the police of hesitating to break up the protests against the enthronement of the new Serbian Metropolitan.

On September 7, Krivokapic announced an internal investigation in...