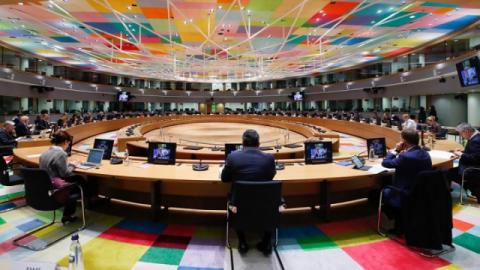 European governments have spent hand over fist, despite ballooning public debt, to prevent the coronavirus pandemic from triggering economic calamity.

Now, the European Union faces calls to loosen its budget rules to allow the largesse to continue, but the topic is a sensitive one for many member states.

The European Commission, the EU executive that oversees the budgets of 27 nations, is doing its utmost to prevent a political fistfight that could spill into this month's election campaign in Germany.

"It's going to be a huge political battle. The question is, when do we begin the battle?" said an EU official on condition of anonymity.

EU finance ministers are meeting on Friday and Saturday (10-11 September) and will gingerly broach the topic at talks at the scenic Brdo castle in Slovenia.

At the heart of the issue is the EU's stability and growth pact, a set of rules on budget spending that ties member states - at least on paper - to public debt of just 60% of gross domestic product. Yearly deficits must stay below three percent.

But the threshold has been breached by many countries and some member states asked the commission to propose ways to bring the rules closer to reality even before the pandemic.

In the 19 states that use the euro single currency, the average debt is expected to reach 102% of GDP at the end of the year.

Most alarmingly, France and Belgium have deepened their membership to the heavy-debt club with debt mountains expected to rise to 120% of GDP.

But a strict application of the budgetary pact would lead to a brutal reduction in public investment for these...