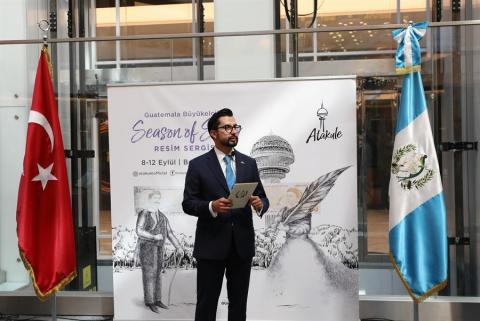 Speaking at the opening ceremony, Guatemala's Ambassador to Ankara Jairo David Estrada Barrios said the artist Fernando Valdiviezo's seven drawings "of the vision of each of the personalities that appear in the Turkish lira banknotes, with the technic of integrating the original banknote that enhances and shows Turkey in current times" will be presented during the five-day exhibition.

There had been several waves of migration from the Ottoman Empire to Latin America, including Guatemala and neighboring countries, from the 1860s till the end of the First World War.

Thanks to the Ottoman citizens living in the region, the foundation of bilateral relations with almost 150 years of history was laid between the imperial and Guatemalan authorities.

In a pre-recorded video message, Valdiviezo said that he used the historical characters behind the Turkish lira banknotes, who have contributed to the cultural and social life of the country, as an inspiration to complete the art pieces.

The exhibition will be open to visitors until Sept. 12 at Ankara's landmark Atakule tower shopping...