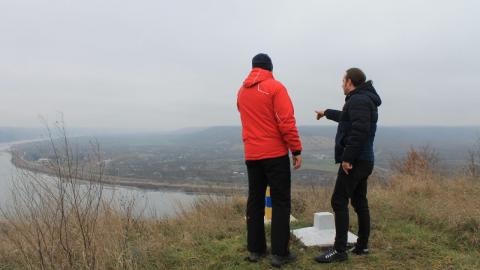 Ukraine's plan to expand the Novodnestrovsk hydropower complex have caused concern in Moldova, which gets much of its water from the Dniester River, which passes through Moldova on its way to the Black Sea.

Moldovan Environment Minister Iuliana Cantaragiu said on TV on Tuesday that protection of the Dniester River is a priority for Moldova in all its negotiations with neighbours.

The energy complex is situated on the river near the border with Moldova, and Kyiv has big plans to expand it.

But some experts warn that Ukraine's plans might cause the Dniester to silt up in Moldova, by lowering the quantity of water released by Ukraine into Moldova through the Naslavcea dam, which borders the two countries.

According to experts, only by connecting two generators to the storage plant, the annual volume of water in the Dniester has dropped from 10 to 7 cubic kilometres. This loss is close to the total amount of water flowing over a year in the Prut, the second largest river in Moldova.

Cantaragiu said negotiations with Ukraine on this issue were continuing but Chisinau would not give in, given that the Dniester is the primary source of water for the country.

"We cannot just do things unilaterally. There must be a consensus on both sides. Negotiations are not simple, but they continue," Cantaragiu told a TV show aired by the national broadcaster.

The minister added that fresh talks are scheduled in October with Ukraine. Cantaragiu said Moldova's main concern was maintaining a sufficient water level in the river and...