Serbian Army youngest officers promoted; Vučić: "We have many challenges ahead" VIDEO 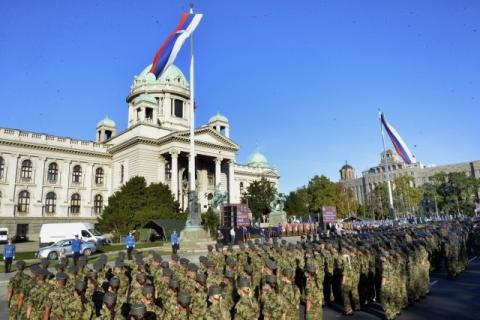 The ceremony is attended by the President of Serbia, Aleksandar Vui.
A total of 139 cadets of the Military Academy and the Medical Faculty of the Military Medical Academy were promoted to the first officer ranks.

Vui: "We have many challenges ahead of us"

"Our army is much stronger today than it was a few years ago, we have incomparably more modern weapons and tools. We buy it more than ever because we don't want conflicts and wars to ever happen. We now want to deter anyone who thinks they can ecert aggression on our country", said Vui.
"We had a lot of problems with recruiting soldiers, with attracting people like you, because of low incomes," said Vucic. During his address, President of Serbia also announced an increase in salaries for members of the army.
"Today, the Serbian Army is by far the most popular institution in the country. I've heard that these four students, wonderful young people, are incredible talents. They say that we have not had such a pilot as Petar Ilic for a long time and I am infinitely happy that they are coming to our army", he said.
"We are facing many challenges and I am sure that we will manage to preserve peace and stability, and our army is the guarantor of peace," said Vucic.
121 cadets of the 141st and 142nd classes of the Military Academy are graduating from the Military Academy, including seven cadets from the Armed Forces of Bosnia-Herzegovina, while 18 boys and girls of the 7th class of that faculty are graduating from the Medical Faculty of the Military Medical Academy.
The best cadets are given pistols as a recognition. These are the lieutenants of the Army Milan Asceric, RV and PVO Petar Ilic, in the rank of services Stefan Zivkovic and the Medical Faculty of the Military...