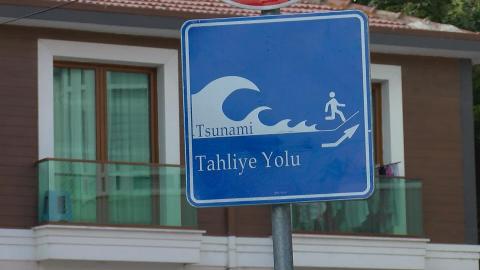 Warning signs directing residents to evacuation areas in case of a tsunami have been installed by the Istanbul Metropolitan Municipality as concerns over a potential disaster of a large earthquake that is expected to hit Turkey continue to mount.

The signs aim to divert people to higher ground from the shores of the Marmara Sea, one of the most seismic areas in the world, with Istanbul sitting near a major fault line.

The first signs were placed in Büyükçekmece, a district on the European side that hosts a long coastline divided from densely populated areas separated from the sea by only beaches and a long promenade.

An early tsunami warning system was also recently installed in the district.

Experts have been warning of a big earthquake in the Marmara region within 25-30 years, which may trigger a tsunami, with sea waves as high as six meters hitting the coastlines of Istanbul.

A recent report presented to the Turkish Parliament called attention to the lingering threat of tsunamis in the Marmara Sea, putting Turkey's big cities along its coast at risk.

Drafted by a parliamentary subcommittee investigating earthquake risks, the report noted that it could take just 10 minutes for towering tsunami waves to reach the shores in the event of an earthquake.