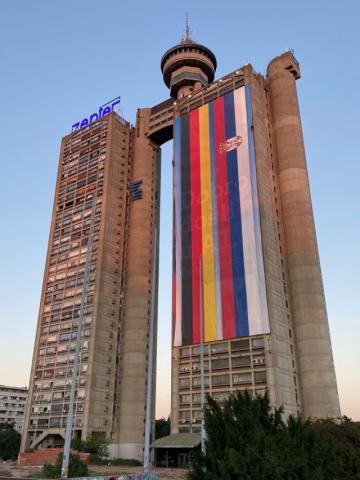 Preparations for her reception are nearing the end, and as part of this visit, the flags of Germany and Serbia were set up at the Genex building in New Belgrade, from the direction of the "Nikola Tesla" Airport, so that this would be the first sign of welcome for the German Chancellor.
Special attention will be paid to security during the visit of the outgoing German Chancellor to Belgrade.
The German chancellor, the routes she will take, the meeting places with Vui and the villa where she will be accommodated will be secured by as many as 3.000 police officers.
Special anti-terrorist units will be engaged, as well as sniper units that will monitor the situation from the surrounding rooftops.
Citizens will be asked to keep the windows closed on the route of the German Chancellor, and the shafts on the route are already welded.
Public transport lines are expected to function extraordinarily at the time of Merkel's arrival, but the details of those changes will be announced later.
The security measures will be the same as when Russian President Vladimir Putin or Joseph Biden, then vice president of the United States, visited Serbia, Blic writes.
Just to reiterate, Merkel should arrive at the airport around 4 p.m.
The formal reception is planned in front of the Palace of Serbia, followed by tête-à-tête meeting of Serbian President and Chancellor Merkel.