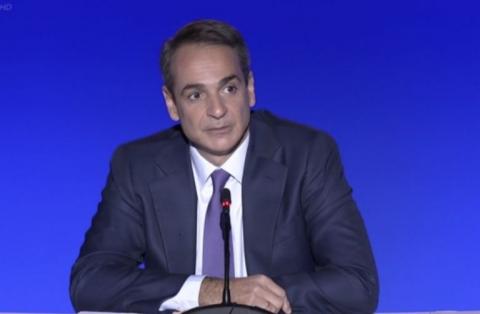 Amidst rampant talk about the prospect of snap elections, Prime Minister Kyriakos Mitsotakis sendt a strong message that his government will serve out its full, four-year term at the annual PM's news conference at the Thessaloniki International Fair (TIF).

Moreover, Mitsotakis said there is no possibility of reaching any consensus with main opposition SYRIZA, for which he blamed main opposition leader Alexis Tsipras, and that he seeks consensus only with the Greek people.

Referring to his major keynote speech yesterday at TIF and the economic policies that he announced, the PM said that, "I am avoiding the terms "hand outs" and "big basket" that journalists in the past have used to describe government economic policies announced at TIF each September."

"All the measures announced are part of a comprehensive strategy to increase wealth, which must be justly distributed. Reducing inequalities is my central choice," he said.

In that framework, Mitsotakis spoke of the social forces on which he is relying for support of the measures, with the main one being the middle class, the core of which is small-to-medium-sized businesses.

Moreover, in his speech yesterday, Mitsotakis said that the country's youth is at the centre of economic planning and that his government has hammered out measures to help them find jobs.

Mitsotakis was cautious in outlining the government's management of the pandemic. He adamantly declared, however, that there will be no shut down of the economy again.

He also conceded that he made a mistake in not imposing a lockdown in Thessaloniki last October [experts had advised him to do so], when a huge COVID-19 epidemic began in northern Greece.

He also expressed his resolve, regarding Greek-Turkish...