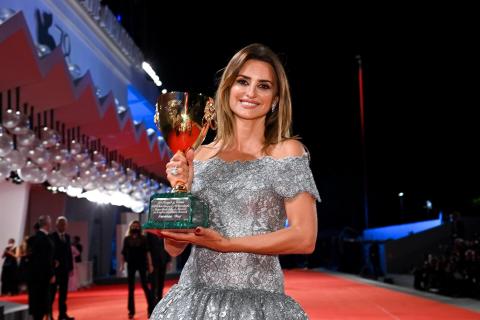 Penelope Cruz took home the best actress award at the Venice Film Festival, the latest success for the all-conquering queen of Spanish cinema.

It was a surprisingly political turn for the flamboyant filmmaker, exploring the trauma of the 1930s Spanish civil war alongside the tale of two mothers sharing a maternity ward.

It marks a departure into dark historical territory for the director, while still focusing on the themes of motherhood and female relationships that have been central to many of his films.

Cruz described Almodovar as "my safety net" in a press conference ahead of their red carpet appearance in Venice.

"He can ask me to do something that can really scare me but I know he will be there waiting to sustain me," she said, adding that she was grateful to the director for giving her "so many different, challenging characters".

Cruz has appeared in seven of Almodovar's movies, including "All About My Mother" and "Volver".

She had a busy fortnight in Venice, also starring in the well-received "Official Competition", a comedy about ego-maniacs in the film business that saw her in a rare appearance alongside her Spanish megastar Antonio Banderas.

Born in Madrid in 1974, she appeared destined for a career in the entertainment, initially studying ballet at Spain's National Conservatory before winning an acting competition that led to roles on TV and in music videos.