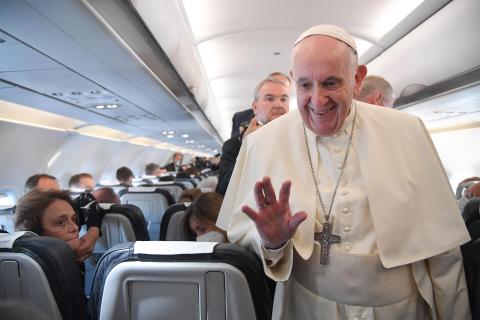 Pope Francis arrived in Budapest on Sept. 12 to celebrate a mass, with eyes focused on his meeting with the anti-migration Hungarian Prime Minister Viktor Orban.

The head of 1.3 billion Catholics will have a half-hour meeting with Orban - accompanied by Hungarian President Janos Ader - in Budapest's grand Fine Arts Museum, in what could be an awkward brief encounter.

On the one side, Orban, a self-styled defender of "Christian Europe" from migration. On the other, Pope Francis, who urges help for the marginalized and those of all religions fleeing war and poverty.

But the approach, eminently Christian according to the pope, has often been met with incomprehension among the faithful, particularly within the ranks of traditionalist Catholics.

Over the last few years, there has been no love lost between Orban supporters in Hungary and the leader of the Catholic world.

Pro-Orban media and political figures have launched barbs at the pontiff calling him "anti-Christian" for his pro-refugee sentiments, and the "Soros Pope", a reference to the Hungarian-born liberal US billionaire George Soros, a right-wing bete-noire.

The pope's plane touched down just before 7.45 a.m. local time (0545 GMT), according to an AFP reporter travelling with the pontiff.

Eyebrows have been raised by the pontiff's whirlwind visit to close the 52nd International Eucharistic Congress.
His seven-hour-long stay in 9.8-million-population Hungary will be followed immediately by an official visit to smaller neighbor Slovakia of more than two days.

Born Jorge Bergoglio to a family of Italian emigrants to Argentina, the pope...