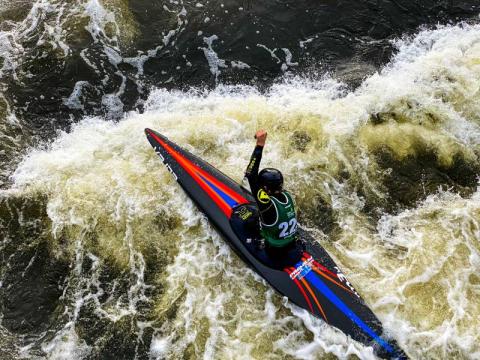 Pau – Slovenia’s Benjamin Savšek finished second overall in the Canoe Slalom World Cup by taking second place in the last event of the season in France’s Pau on Sunday.

Savšek finished 0.16 seconds behind the winner, Denis Gargaud Chanut of France, who was also crowned the winner of the World Cup.

The 34-year-old was not the only Slovenian on the podium, as Luka Božič was third to achieve his best result of the season in the competition.

Savšek, the gold medallist in C1 at the Tokyo Summer Olympics, again showed that the Pau course suits him, as he won the world and European champions titled there in the past.

“A good run is behind me, so I am glad that I managed to come in second both in the race and overall standings,” Savšek told the Canoeing Association of Slovenia.

He added that this was yet another nice result, which made him look forward to the world championship in Bratislava from 21 to 26 September.

“This is additional motivation. I am glad that I managed to get prepared for the World Cup and to have a decent run. I hope that things will also run smoothly at the world championship,” Savšek said.

Overall, Gargaud Chanut collected 243 points, and was followed by Savšek with 217, while Božič finished 6th in the standings with 182 points.