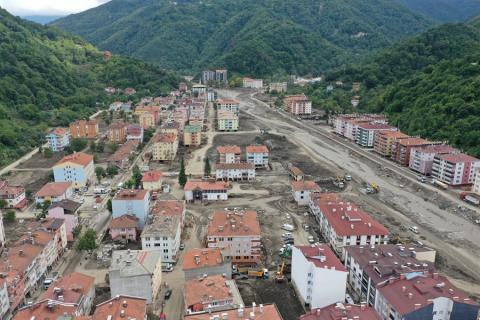 Heavy rains and ensuing flash floods in the country's north almost a month ago left at least 82 people dead.

The province of Kastamonu was the most affected where 71 people lost their lives.

Moreover, 10 people were killed in the province of Sinop and another one in Bartın.

"Search operations for those 15 missing people are carried out by nearly 460 personnel on the ground, in the air and sea," Soylu told journalists on Sept. 12 in Kastamonu's Bozkurt district.

Around 103,000 food packaged and another 50,000 packages containing hygiene materials have been distributed to the flood victims, Soylu said.

"In Bozkurt alone, 25,000 truckloads of mud have been removed, adding the other affected areas, the amount of mud removed after the disaster sums up to 35,000 truckloads. Also, 65,000 cubic meters of lumbers have been collected from the sea. Some 6,000 people, including 3,200 volunteers, joined those operations," the minister added.

He also said that 450 million Turkish Liras ($53 million) have been raised in donations collected by the Disaster and Emergency to date.