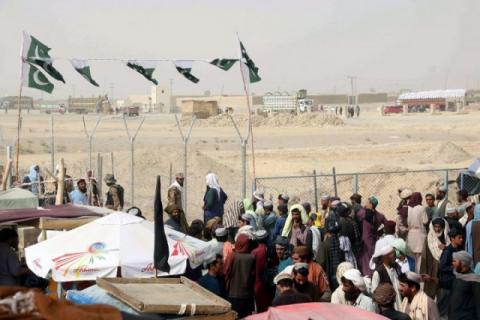 The United Nations exhorted the world on Monday to raise 6 million for Afghanistan, where poverty and hunger are spiraling since the Taliban took power and billions in foreign aid have dried up amid Western distrust of the Islamist militants.

UN Secretary-General Antonio Guterres delivers a speech during a hosts aid conference on Afghanistan, in Geneva on September 13, 2021. (Photo by Fabrice COFFRINI / AFP) (Photo by FABRICE COFFRINI/AFP via Getty Images)

After decades of war, suffering and insecurity, Afghans are facing "perhaps their most perilous hour," U.N. Secretary-General Antonio Guterres said in his opening remarks to a conference in Geneva seeking aid for Afghanistan.

"The people of Afghanistan are facing the collapse of an entire country — all at once."

He said food supplies could run out by the end of the month.

The Taliban ruled Afghanistan between 1996-2001, barring women from work and teenage girls from school, and were toppled in an invasion led by the United States, which accused them of sheltering militants behind the Sept. 11 attacks.

They swept back to power last month in a lightning advance as the last U.S.-led NATO troops pulled out and the forces of the Western-backed government melted away.

But as if to underline Western misgivings, United Nations human rights chief Michelle Bachelet, also in Geneva on Monday, accused the Taliban of breaking promises by once more ordering women to stay at home, preventing teenage girls attending school and searching house-to-house for former enemies.

Alexei Navalny Nominated for EP andrey Sakharov Human Rights Prize
The end; This is bad news for all