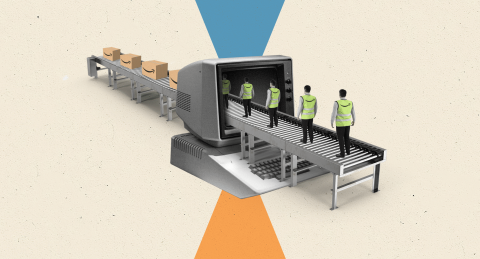 So when Amazon set up shop on the outskirts of the capital, Prague, in 2015, many Most residents rushed to apply; the hourly pay rate of 6.5 euros, Amazon's willingness to overlook bad credit when hiring and the offer of free transport to and from work was compensation enough for the 160-kilometre round trip each day. Máková, 53, joined in 2017.

Three years later, in August 2020, Amazon terminated her contract, citing loss of medical fitness. Máková had begun experiencing pain, numbness and tingling in her hands, the result, she says, of repetitive motions over an extended period that involved packing 2,000 delivery packages in a single 10-hour shift.

The pace at which she worked was monitored by a computer telling her exactly where to find each product, part of the algorithmic management that has become standard in warehouses run by the US tech giant as it races to satisfy demand from online shoppers.

In April 2021, Máková had surgery on her right arm to release nerve pressure from carpal tunnel syndrome. Two months later, the Hygiene Authority of Czechia's Central Bohemian Region ruled that Amazon was responsible for her injury, giving her the right to claim compensation.

Amazon did not comment directly on Máková's case, but an official, who spoke on condition of anonymity, told BIRN: "Safety is integral to everything we do at Amazon, every day, in every operation."

Máková, however, recalled pressure to perform and confusion over how Amazon's 'algorithmic management' evaluated her.