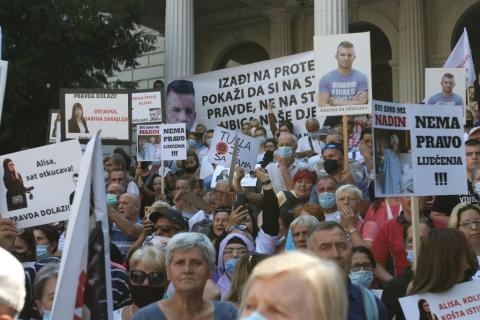 Davor Dragicevic's lawyer, Dragan Tolimir, confirmed to BIRN that he had received the Banja Luka prosecution's decision to discontinue the investigation against him on September 8.

Dragicevic was under investigation over events in front of the Republika Srpska entity parliament in Banja Luka on December 17, 2018, when members of the advocacy organisation Pravda za Davida [Justice for David], led by Davor Dragicevic, gathered in front of the building while its members were electing a new government for the Serb-dominated entity to protest against proposals to nominate Dragan Lukac as interior minister again.

The charges against Dragicevic were filed by Minister Lukac.

Dragicevic, who now lives in Vienna, told BIRN that the discontinuation of the investigation came too late, given that three years had passed since then.

"They are almost three years late. We recognized their intentions in time and sensed their show trials," he said, commenting on the decision to abandon the investigation against him.

He said that he still insisted on finding his son David's killers, but also on having those who allegedly tried to cover up the murder and instead persecuted him and members of the Justice for David group, take responsibility.

Lawyer Tolimir said the discontinuation of the investigation against Dragicevic was another sign that judicial institutions in the entity had been used only to intimidate citizens.

"This is an indicator that this was a clear case of persecution and, that they [the authorities] used all means to prevent people from protesting....