Merkel and Vučić in the Palace of Serbia: An official meeting is underway 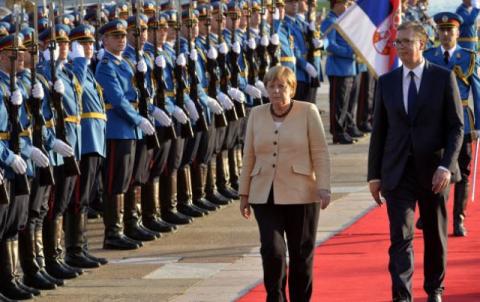 Vui has repeatedly expressed his gratitude to Merkel for everything she did for Serbia while she was the Chancellor of Germany.
According to Vui, Merkel has done a lot for Serbia, especially when it comes to German investments in the country. Vui repeated the same message in tonight's address.
The chancellor, who is going to Tirana after Belgrade, where she will meet with the prime ministers of the Western Balkan countries, will stay in Belgrade for the longest time and will have a series of meetings during that time.
She underlined the importance of cooperation between Serbia and Germany, as well as that it is necessary to do everything necessary for Serbia and other countries in the Western Balkans to join the EU.

After the meeting with Vui, Angela Merkel mentioned that they discussed a number of different topics.
"I believe that we are honest and sincere in our conversations, but also the ability to listen to the other side is what distinguishes the relationship between Vui and me. I know him as a man who does not make false promises. Thank you for your hospitality," she said.