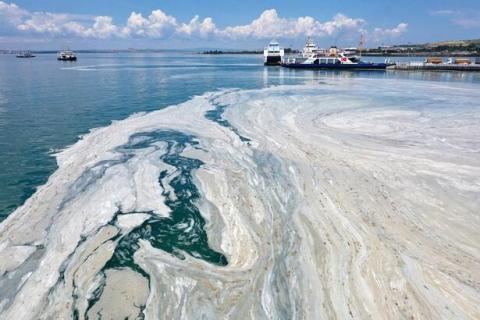 A field study conducted to examine the marine mucilage, which invaded the Marmara Sea a few months ago, has revealed that though the sea's surface is now clean thanks to the ongoing efforts, the threat is not over yet.

The study has once again brought to the horizon the need to address the problem of pollution that has become a grave environmental concern.

Sailing off the sea within the scope of the Marmara Environmental Monitoring Project (MAREM) and examining 200 stations and 450 different points at the sea between Aug. 28 and Sept. 4, the researchers obtained striking findings, apart from pollution.

The presence of marine mucilage into the depths of the Marmara Sea continues to be a threat as the jelly-like layer of slime has made its way to the bottom even though it was cleared from the surface, said Levent Artüz, a hydrobiologist leading the project.

"Mucilage still exists, but its shape is different. Bacteriologically, a small part of it decomposes naturally. But bacteria that will break up such a large mass will create a second problem in the future," Artüz said, adding that a serious biomass will remain even if the mucilage disappears.

The thick and slimy substance made up of compounds released by marine organisms has surfaced in the Marmara Sea in late May, alarming marine biologists, environmentalists and eventually officials.

Mentioning that color changes are beginning to be seen in the Marmara Sea, Artüz said that the sea was no longer blue but gray. The expert also emphasized that the biodiversity in the sea has completely hit the bottom.

"We can call the Marmara Sea a habitat where living things almost do not live. Right now, it's like a demolished building," he noted.