Trabzonspor fight to earn 2-2 draw with Galatasaray at home 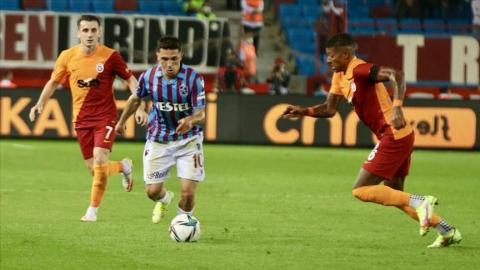 Trabzonspor fought hard to secure a 2-2 draw with Galatasaray in a Turkish Süper Lig showdown on Sept. 12, an upsetting result for the Lions.

Galatasaray scored the opener in the 20th minute as Turkish midfielder Emre Kılınç finished in a one-on-one position at Trabzon's Medical Park Stadium.

Trabzonspor's Edgar failed a back pass to goalkeeper Uğurcan Çakır as Kılınç intercepted the ball to score.

In the 33rd minute, Galatasaray doubled the lead as Kılınç scored again.

Trabzonspor goalkeeper Çakır left his goal to tackle Galatasaray's Kerem Aktürkoğlu, but Çakır was unable to catch the ball. Halil Dervişoğlu made a quick one-touch pass to Kılınç, who was roaming free around the penalty spot to make it 2-0 for the Lions.

Home team Trabzonspor did not give up, as in the 41st minute the Black Sea club's Danish forward Andreas Cornelius scored a close range goal.

Galatasaray led the first half 2-1 but Trabzonspor equalized in the 62nd minute.

Hamsik skipped a Galatasaray defender and passed the ball inside. Nigerian winger Anthony Nwakaeme, who was unmarked in the area, controlled the ball and took his time to score with a right-footed strike, 2-2.

Galatasaray displayed a disappointing performance as the Lions could not secure the lead.

So the match of the week ended as a 2-2 draw as points were shared.

Second-placed Trabzonspor have 10 points in four matches in the Super Lig led by Beşiktaş, who earned 10 points as well.