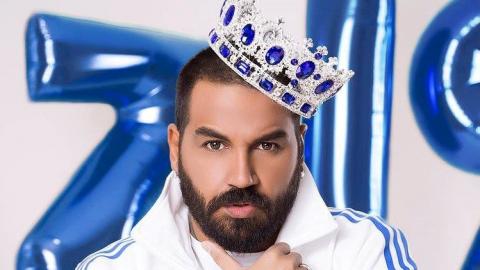 "Homosexual perverted Azis will take to the stage at a festival organised for local people," said an article published by newspaper Yeni Akit on Sunday.

The news was shared by many Islamists, targeting Azis and the Kestel municipality, where the Balkan Fair is being held, and which is also run by President Recep Tayyip Erdogan's ruling Justice and Development Party, AKP.

After the Islamists' campaign began, the Kestel municipality removed the performance by Azis, which was scheduled on September 19, from the festival's agenda. He was replaced by another musician, Toni Storaro, also known as Tuncer, a Bulgarian of Turkish ethnicity.

Yeni Akit then reported on Monday that the AKP-run municipality had corrected its "wrong decision" because of the backlash against Azis.

Yeni Akit is a pro-government daily, many of whose columnists have an influence on the Turkish government. The newspaper is also known for its coverage opposing women's rights and LGBT groups.

Azis is a popular Bulgarian LGBT music star of Roma origin and an activist for LGBT and Roma rights. His songs are popular across the Balkans and Turkey, and he performed for Bulgaria at the 2006 Eurovision Song Contest.

However, his performances have often targeted by conservative groups in Bulgaria and across the Balkans.

He has not commented publicly on the Turkish cancellation so far.

The Balkan Fair in Bursa's Kestel municipality is a festival featuring musicians and artists from the Balkans and Turkey which is being organised for the seventh time this year.