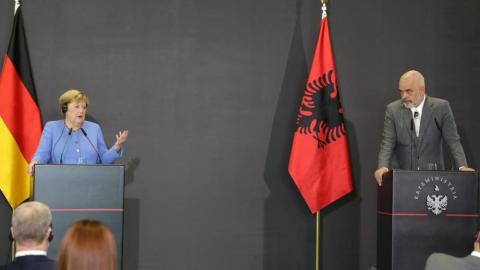 Angela Merkel visited the Albanian capital Tirana on Tuesday, the last stop on a brief farewell Balkan tour which saw the German chancellor encourage the countries in the region to push ahead with reforms to improve their chances of joining the European Union.

"I would like to congratulate Albania on its efforts in recent years to reconstruct its justice system," Merkel told a joint press conference with Albanian Prime Minister Edi Rama.

She said that "North Macedonia and Albania have met the conditions to start [EU] membership negotiations", but a start date for accession talks has not been agreed yet because Bulgaria imposed a veto over its dispute on mutual historical issues with North Macedonia.

In Tirana, Merkel also met the heads of governments of Bosnia and Herzegovina, Montenegro, North Macedonia and Kosovo. Her visit focused on developing regional cooperation and the implementation of the Common Regional Market, an initiative that is part of the so-called Berlin Process, an EU-backed initiative to boost regional cooperation among six Western Balkan countries and aid their European integration.

Rama emphasised that the recently-established Open Balkan initiative, a 'mini-Schengen' economic zone set up by Albania, North Macedonia and Serbia, does not "contradict the Berlin Process".

"We must work for the region to rise, in parallel. We do not have to wait to join the EU to build highways or digital infrastructure or common markets," he added.

Merkel, who was the initiator of the Berlin Process seven years ago, said it was "the core of everything and in this context cannot be replaced"....