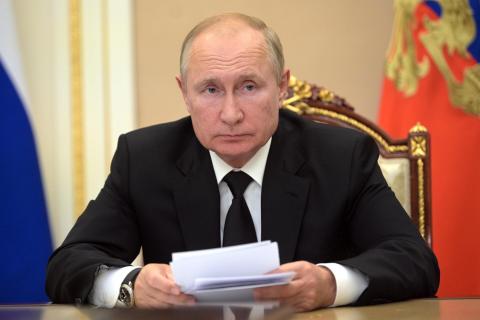 Russian President Vladimir Putin is self-isolating as a precaution after several members of his entourage fell ill with COVID-19, but is "absolutely" healthy and does not have the disease himself, the Kremlin said on Sept. 14.

Putin, 68, will therefore not travel to Tajikistan this week for planned regional security meetings expected to focus on Afghanistan, but will take part by video conference instead.

The Kremlin said Putin took the decision to self-isolate after completing a busy round of meetings on Sept. 13, which included face-to-face Kremlin talks with Syrian President Bashar al-Assad.

The main problem, in my view, is that foreign armed forces remain in certain regions of the country without the approval of the United Nations and without your permission," Putin told Assad during their meeting, according to a Kremlin statement.

Putin also congratulated him on winning a fourth term in office in a presidential election in May.

"Terrorists sustained very serious damage, and the Syrian government, headed by you, controls 90 percent of the territories," Putin said, according to a Kremlin statement.

The Kremlin said Assad thanked the Russian leader for humanitarian aid to Syria and for his efforts to halt the "spread of terrorism."

He lauded what he called the success of Russian and Syrian armies in "liberating occupied territories" of Syria.

Assad also described as "antihuman" and "illegitimate" sanctions imposed by some nations on Syria.

He was quoted by the RIA news agency as telling the Paralympians on Sept. 13 that he was worried about the COVID-19 situation in...

Pressure Mounts on Poland Over Migrant Rights at Belarus Border

Do Bulgarian Villages Stand Chance of Bouncing back to Life

China, Not Russia, is the Greater Threat to Kosovo