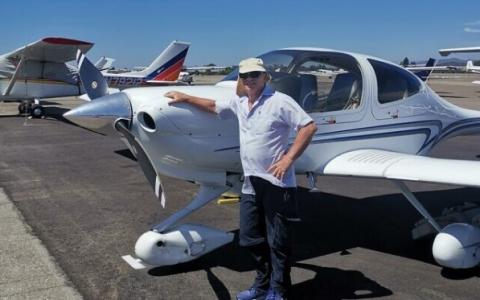 Israeli media have revealed the identity of the two passengers in a Cessna aircraft who died after the plane crashed yesterday into the just one minute before it was to land at the Samos airport.
.
The victims, according to the Times of Israel were Haim Geron, a witness in the Netanyahu corruption trials, and his wife Esti. They were the only passengers on the plane.

Α major search-and-rescue mission was launched immediately in the sea area off of Potokaki Pythagoreiou of the island and debris from the aircraft as well as the passengers, who are said to have died immediately upon crashing, were retrieved.

It was a private flight and the aircraft was lost on radar just one minute before it was to land. Shortly thereafter a deafening sound was reportedly heard. Geron's body was found after his wife's.

The couple were about 70 years old and residents of Tel Aviv.

Their bodies were taken to a Samos morgue where an autopsy was to be performed.

The cause of the crash has not yet been determined.

Geron had served as deputy director-general for engineering and licensing at the Israeli Communications Ministry.

The couple took off from Haifa on a single-engine plane in the afternoon and were flying close to the island of Samos, near Turkey, when their light aircraft went down, the Israeli news outlet reported, citing the Israeli foreign ministry.

"In May 2020, Geron, an attorney by training, spoke with Radio 103FM about the testimony he had given in the Netanyahu trial and said it related to the development of the country's optical fiber infrastructure, the communications industry, and telephone services. Probed as to whether he had ever witnessed any criminal activity at the ministry, Geron responded that "the court...