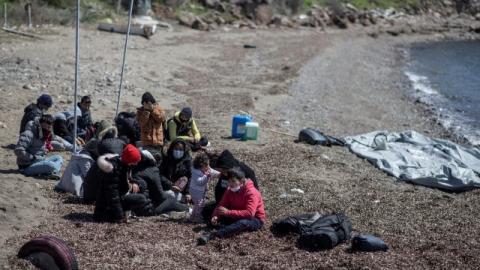 While Greece turns to increased surveillance and more border patrols on its land and sea borders with Turkey to meet an anticipated new wave of refugees from Afghanistan, following the withdrawal of US troops and that country's fall to the Taliban, human rights experts have criticized well documented reports of violent pushbacks.

"A more restrictive framework has been created in relation to reception conditions and asylum procedures in Greece," Vassilis Kerasiotis, country director of the NGO HIAS Greece, told BIRN.

"The legislative framework excludes various nationalities from refugee status determination procedures, unilaterally claiming Turkey is a safe third country for them, while reception conditions for those arriving in Greek islands remain far below European standards," he said.

"On the other hand, the announcement of closed reception centres is proof of the hostile environment for refugees and asylum seekers," he added.

The Greek government has come under criticism at a European level also for what is seen as a step back in provision of human rights of people on the move in Greece.

On September 9, the Council of Europe's Commissioner for Human Rights, Dunja Mijatovic, condemned a new Greek bill that speeds up deportations and returns of migrants, as well as limits the actions of NGOs participating in search-and-rescue operations in the sea.

Greece has received 276 million euros from the European Commission for the construction of reception facilities on the five Aegean islands receiving asylum seekers from Turkish shores. The first centre, on Samos, opens this Saturday, September 18.

According to official figures, the number of migrants and refugees on the islands has dropped by 96 per cent, but human...