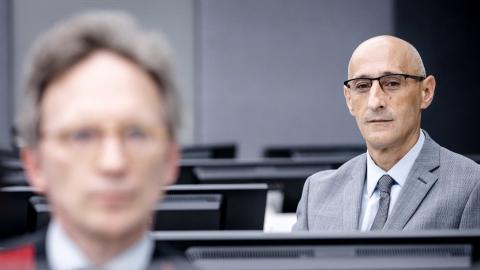 According to his indictment, the unit had around 500 to 600 fighters. It operated in villages in northern Kosovo within the KLA's Llap Operational Zone, mostly in the Podujeve/Podujevo region, some 20 kilometres north-west of the capital Pristina.

It claims that between April 1 and 19, 1999, Mustafa and his subordinates illegally jailed at least six people in a stable for cattle that the KLA used as a detention compound in the mountainous village of Zllash/Zlas in the Pristina municipality.

It also claims that they "routinely assaulted detainees… both physically, including through beatings with various instruments, burning and the administration of electric shocks, and psychologically, including through threat of death and serious bodily injury, fear, humiliation, discrimination on political grounds, intimidation, harassment, interrogation, and forced or coerced statements and confessions.

In addition to these allegations, the indictment also says that Mustafa is believed to have bragged about the Serbs who he and members of his BIA unit executed.

Mustafa, who was born in Pristina 49 years ago and was known during the war by the KLA nom de guerre of Commander Cali, pleaded not guilty on all counts.

"I had no choice but to go to war for freedom and...