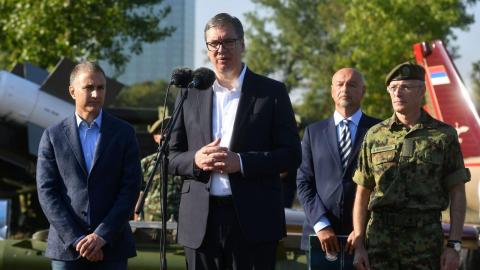 Serbia and Bosnia's Serb-dominated entity, Republika Srpska, on Wednesday celebrated a newly adopted holiday, the Day of Serbian Unity, Freedom and National Flag, displaying Serbian flags on institutions and with calls for Serbs in all countries to display the flag in their windows.

This is second year of marking the holiday, after Serbian President Aleksandar Vucic announced it in August 2020.

At the central event in Belgrade on Wednesday evening, President Vucic, Bosnian Serb leader Milorad Dodik and Serbian Orthodox Church Patriarch Porfirije were due to speak.

Serbia's Defence Ministry and Army organised a presentation of weapons and military equipment in Usce Park, in Belgrade, on Wednesday as well. Besides Vucic, Defence Minister Nebojsa Stefanovic and Chief of Staff of the Army Milan Mojsilovic were present.

The Republika Srpska public broadcaster, Radio Television of Republika Srpska, reported that citizens in various municipalities of the RS had put out flags on their houses or in windows.

In the main RS city of Banja Luka on Tuesday evening, Dodik said: "Serbian unity implies our gathering, our struggle with the economy, and the results are not small".

In Montenegro, Serbian unity day was also widely celebrated, with Serbian flags flying in the main streets of Budva and other towns and on private houses across the country.