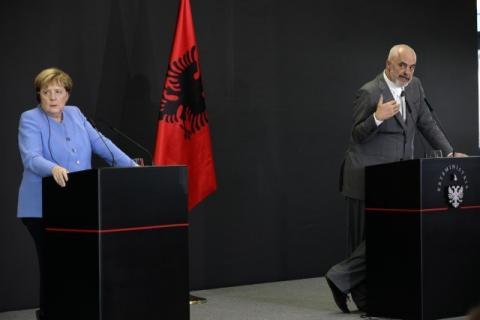 This happened during a joint press conference with German Chancellor Angela Merkel in Tirana.
"Shame on Albanian PM @ediramaal, who deliberately ignored the questions of Kosovo journalists. The @EFJEUROPE condemns this outrageous segregation", EFJ's Secretary General Ricardo Gutirrez said on Twitter.
He also shared the news from the Albanian portal Exit News, in which it is stated that Rama refused to answer the questions of the journalists from Kosovo and Metohija during the joint conference with Merkel.
As it is stated, the journalist of the Pristina Klan Kosova reported that journalists from six media from the territory of Kosovo and Metohija waited for 40 minutes tp no avail to get a chance to ask a question. He emphasized that all journalists were accredited and appeared in person at the conference.
Exit News reported journalists' claims that they were not allowed to ask a question to either Rama or Merkel. A video posted by the Klan Kosova journalist on Facebook shows journalists sitting with their hands raised, waiting to ask a question.