Solar panels may be installed on lakes to reduce evaporation 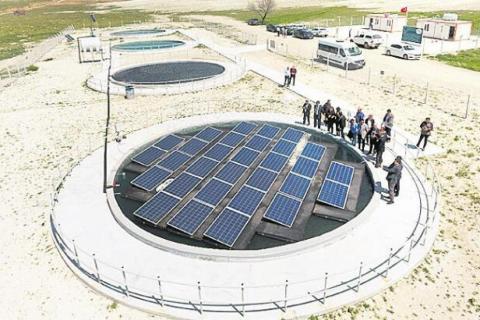 Turkish authorities are planning to install solar panels on lakes and dams to prevent evaporation as some of the major lakes in Anatolia are under the threat of drought due to reduced precipitation levels resulting from global warming.

The Agriculture Ministry as well as the General Directorate of State Hydraulic Works (DSİ) are chalking out plans to save the country's water resources, as soaring temperatures have aggravated not only evaporation and led to insufficient precipitation but is affecting both agriculture and human life.

Determining that unconscious use of water resources, wrong irrigation and drainage practices, as well as evaporation, cause serious water loss, authorities prepared a four-option project in line with a program centered on Lake Burdur in Turkey's southwest.

Four pools were created on Lake Burdur, one with shade balls and the other with floating solar panels. One of them was chosen as a control pool, and a mixture containing chemical substances, defined as a monolayer, was placed in the last one.

Precise measurements made as a result of the three-year study revealed some pleasing findings.

However, the study noted that although shade balls helped in saving water significantly, the treatment plants have to be raised to a higher standard if used as drinking water sources, requiring serious financial resources and investments.

Emerged as a result of the examination of the floating solar panels, the findings revealed that the organic matter phthalates were transferred to the water in large...