"These are ambassadors, I know who they are" VIDEO / PHOTO 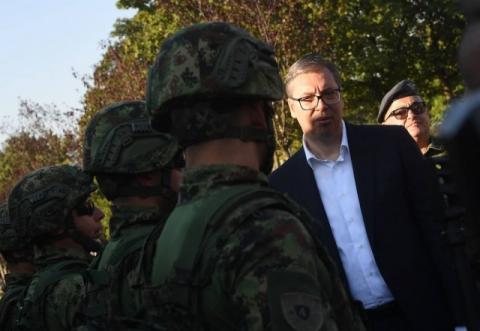 Vui said that it is important to preserve safety of the people in Kosovo and Metohija, respecting the Brussels Agreement. He stated that the verdict against Ivan Teodosijevi is also in focus.
"We cannot influence irrational moves in any way, it's impossible," Vucic said after the display of weapons and military equipment in Usce.
When asked who was interested in destroying weapons, Vui explained that $ 200 was paid for the destruction of "one arrow".
"We are militarily neutral, but we are a libertarian country that protects itself and does not endanger anyone," President of Serbia said, adding that he listened to Sasa Jankovi last night and stated that he was grateful for that gesture and thought that he "did not lie".
"It is important that Jankovi said that they were ambassadors, not lower ranked officials, but direct representatives of the states. I think I know who they are," President of Serbia explained.
Vui says that he does not think that they wanted to kill him, but, as he claims, "someone delivered his cardiovascular medical record to them".
"But it is not terrible to die, we will all die. His statement is very important for the history of Serbia. It will be written about in 10, 20 or 50 years. As far as I am concerned, while I am in this position, I will pursue a policy of independent, free Serbia, and taking into account only our interests. You always have to pay a certain price for such a policy. All together, opposition leaders do not have as many as negative announcements as I do. That is what it looks like in a dictatorship," he said. Vui said that no one can beat the results of a hard work, adding that many go to foreign embassies out of vanity.
"I'm sure it's not an isolated case, but there are dozens of...