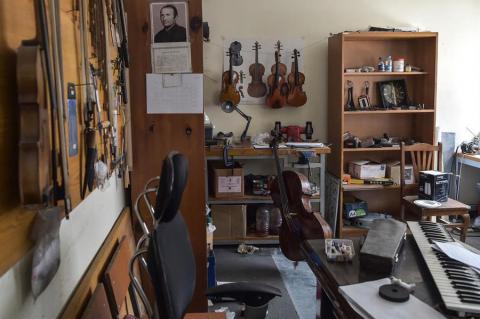 Viola player Bahar was practising at her music college in the Afghan capital, when news broke that the Taliban had reached the city.

Terrified of a return to the days when music was forbidden and women were banned from education, she and her classmates rushed home, abandoning their beloved instruments.
"We all ran away. We saved ourselves, leaving the instruments at the institute," Bahar tells AFP, using a false name to protect her identity for fear of reprisal.
"I felt like I had lost a family member."

The Taliban, who banned music outright during their brutal and oppressive rule from 1996 to 2001, swept back into power on August 15.

They have promised a more moderate brand of rule this time - though they have made clear that they will run Afghanistan within the restrictive limits of their interpretation of sharia law.
After racing home from the Afghanistan National Institute of Music (ANIM), Bahar was devastated to learn that Taliban militants had occupied the campus, turning its classrooms into dormitories.
"I feel like I am no longer living. Physically, I am alive, but the Taliban have taken away my soul," she says, breaking down in tears.

Bahar was introduced to the college when she was 12 years old, and she says the viola quickly became her "best friend".
"Music is food for the soul," she says, adding that she has performed in India, Sweden, the United Kingdom and Azerbaijan.
"I feel extremely peaceful when I play the viola, especially when we play together in the girls' orchestra," she adds.
During a visit by AFP to the college, no music can be heard in its corridors -- all that can be heard is the chatter and squabbling of Taliban soldiers.
Armed guards cradle Kalashnikovs in the...