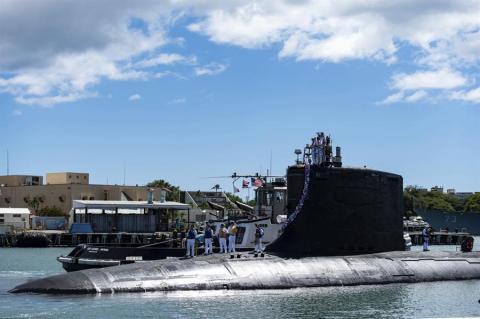 The announcement of the alliance - made in a video meeting by President Joe Biden, Australian Prime Minister Scott Morrison and his British counterpart Boris Johnson - is sure to raise hackles in Beijing.

It also infuriated France, which had been negotiating a multi-billion-dollar sale of conventional submarines to Australia.
The three leaders did not mention China in unveiling the alliance, dubbed AUKUS, but their intent was clear,with each referring to regional security concerns.

"This initiative is about making sure that each of us has a modern capability - the most modern capabilities we need - to maneuver and defend against rapidly evolving threats," Biden said.

Morrison emphasised the three nations' all respected "freedom" and "the rule of law", and that the alliance would help ensure security in the Indo-Pacific.

The Western allies often reference the rule of law and freedoms when railing against China's military build up in the South China Sea.

The first major initiative announced under the new alliance was the fleet of eight state-of-the-art nuclear-powered submarines for Australia.

The submarines, said Biden and the other leaders, will not be nuclear armed, only powered with nuclear reactors.
But they will allow Australia's military to travel, and strike targets, far from its coast.

"(They) are quieter, faster and have longer endurance, which will allow Australia to deploy its future submarines to Indo-Pacific locations for much longer periods of time", Ashley...