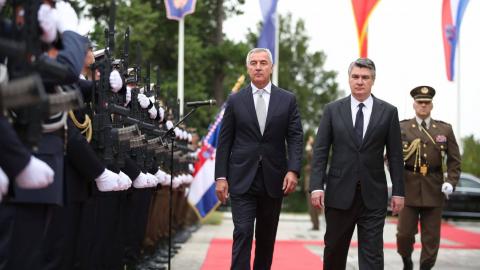 During his visit to Croatia, Djukanovic said Serbia's President, Aleksandar Vucic, was reviving the retrograde political messages of the wars of the 1990s in former Yugoslavia.

"Once again, the illusion is being spread that multiethnic democracy is not possible in the Western Balkans, that it is time to create enlarged nationally and religiously homogeneous states," he said.

"Montenegro's civic and secular identity is attacked by the servility of the current [Montenegrin] government to the centres of Serbian nationalism in Belgrade," he added.

In an interview for the Croatian daily Jutarnji list on September 11, Djukanovic accused the Serbian President of interfering in neighbouring countries, invoking a need to protect the supposedly endangered rights of Serbs in the region.

Responding to Djukanovic's warning that the peace and stability of the region were in danger, Vucic on September 12 claimed Djukanovic wanted a Montenegro without Serbs and the Serbian Orthodox Church.

Relations between Djukanovic and Vucic have been uneven since Vucic's Serbian Progressive Party took power in Belgrade in 2012.

The two leaders cooperated until 2016, when relations worsened after Djukanovic's ruling Democratic Party of Socialists, DPS, angered Serbia and the Serbian Orthodox Church protests by adopting a controversial law on religion. The dispute played a role in costing the DPS the parliamentary elections in Montenegro last August.