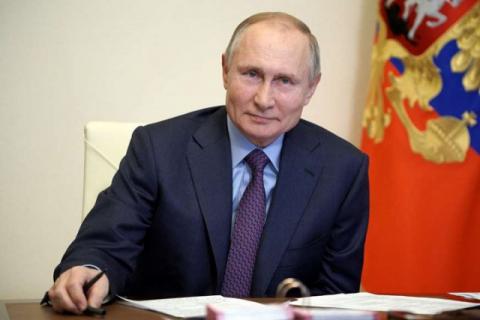 President Vladimir Putin announced on Thursday that dozens of people in his inner circle at the Kremlin had tested positive for coronavirus, AFP reported. Earlier this week, the 68-year-old Putin said he was self-isolating after announcing an outbreak among members of his entourage. "Cases of the coronavirus were detected in my inner circle. Not just one or two but several dozen people," Putin said, speaking via video link at a meeting of a Moscow-led security alliance.

News of the extent of the outbreak at the Kremlin comes a day before staggered three-day parliamentary elections open in Russia. Putin had been due to attend the meeting of the Collective Security Treaty Organisation (CSTO) in Tajikistan's capital Dushanbe in person, but said on Tuesday he would instead join remotely. Authorities have gone to great lengths to protect Putin -- who has been vaccinated with Russia's homegrown Sputnik V jab -- since the start of the pandemic.

Russia has the fifth-highest number of recorded Covid cases, according to an AFP tally, and has struggled to rein in infections despite easy access to vaccines. According to the latest figures, the country has recorded more than 7 million cases and 195,041 deaths, the highest death toll in Europe.

Infections have been falling in recent days after a spike this summer, but health officials still reported 18,841 new cases and 792 new deaths on Wednesday.

Authorities have struggled with a vaccine-sceptic population, with independent polls showing that a majority of Russians do not plan to be inoculated. As of Tuesday, about 40.2 million of Russia's 146 million people had been fully vaccinated, according to the Gogov website, which tallies Covid data from the regions.