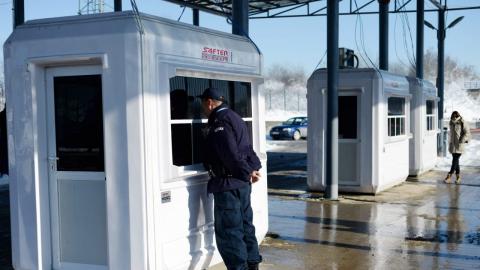 An agreement between Kosovo and Serbia on vehicle licence plates expired on Wednesday but the situation at the Merdare crossing point in northern Kosovo has not changed, despite the Pristina government's announcement that it will not renew the deal.

Kosovo citizens meanwhile had to continue removing their Kosovo-issued plates on entering Serbia, as they have done for years, as Serbia does not recognise either Kosovo or licence plates with the letters RKS, for Republic of Kosovo.

Artir Retkoceri, director of Adio Tours, a Kosovo passenger transport company whose buses often drive through Serbia, told BIRN that his company is not expecting any changes soon.

"At the border we must remove our [Kosovo-issued RKS] licence plates and take temporary paper licence plates from the Serbian police officials. These licence plates cost five euros and are valid for up to two months," Retkoceri explained.

There are two types of plates in Kosovo, starting with KS (for Kosovo) and RKS (for Republic of Kosovo). Plates with the letters KS were issued under the former UN administration of Kosovo.

Deputy Prime Minister Besnik Bislimi told media on September 9 that Kosovo did not intend to renew the agreement.

"The agreement with Serbia did not bring benefit to 99 per cent of the citizens of Kosovo who were also forced to be...