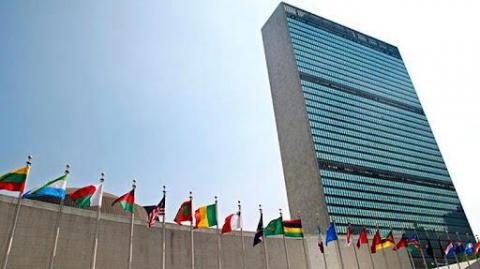 All leaders and diplomats attending the United Nations General Assembly in New York next week will have to provide proof of vaccination, the city government said on Sept. 15, sparking anger from Russia.

Delegates must be vaccinated to enter the debate hall, the mayor's office told the assembly president in a letter dated September 9, but Moscow queried whether New York had the authority to enforce the mandate.

Attendees must also be vaccinated if they want to eat or exercise indoors, the letter added.

More than one hundred leaders including U.S. President Joe Biden, Brazil's Jair Bolsonaro, Turkish President Recep Tayyip Erdoğan and British Prime Minister Boris Johnson have announced they plan to attend in person.
Others will make an address via videolink.

Bolsonaro, who had the virus last year, has said he would be the "last Brazilian" to get vaccinated.
His office did not immediately respond to requests for comment from AFP regarding the New York announcement.
New York began enforcing a vaccine mandate on Monday, requiring proof of at least one shot for many indoor activities, including restaurants and entertainment venues.

The letter signed by New York City's health commissioner and confirmed by his spokesman said the U.N. debate hall was classified as a "convention center," meaning all attendees must be vaccinated.

"They must also show proof of vaccination prior to dining, drinking or exercising indoors on the U.N. campus, and in order to partake in all of New York City's wonderful entertainment, dining and fitness activities," he said.

But Russia's ambassador requested an urgent meeting of the General Assembly to discuss the move.