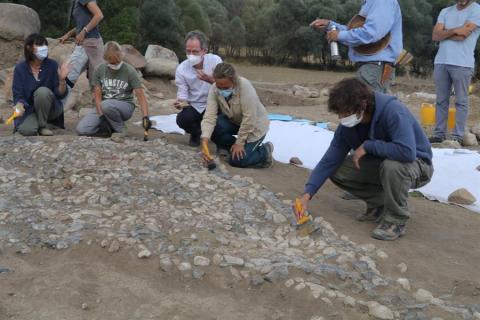 Excavations that have been ongoing in the Central Anatolian province of Yozgat have unearthed a 3,500-year-old mosaic, believed to be the oldest in the world.

Works have been carried out in the mound in collaboration with the Italian University of Pisa and Yozgat Bozok University since 2012. The 3,500-year-old historical mosaic was found in Uşaklı Mound, located within the borders of Büyüktaşlık Village in the Sorgun district. It was reported that the mosaic consists of 3,147 stones.

The head of the excavations, Anacleto Dagostino said, "The mosaic we found is the oldest mosaic in the world. This mosaic unites a Hittite-era structure. We know there are similar mosaics in Greece; but probably this mosaic is older than them. We are currently examining it. We believe that it is the oldest mosaic of the Near East. Assyrian mosaics in Northern Mesopotamia, which are considered to be similar examples, are dated to the ninth and seventh centuries. From this point of view, these Hittite-era mosaics are much older than the Assyrian-era mosaics. The size of the mosaic is 7 meters by 3 meters. Nearly 3,147 stones were used. The mosaic is made of pebbles of various very different colors. It has various decorative features. We think that it is connected to the temple in this area."

Provincial Culture and Tourism Director Hüseyin Çiftçi said its structure revealed that it is the oldest mosaic.

"Because it is very primitive. Many examples of such mosaics are found in Gaziantep. We can say that the most primitive form of those mosaics is the one here. We plan to add this place to tourism," he added.