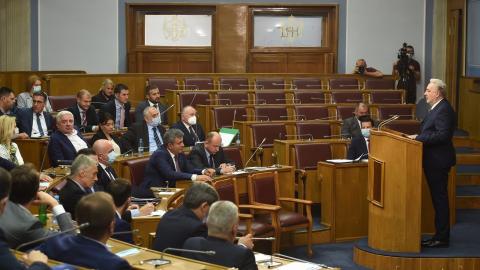 In a joint statement on Thursday, the Democratic Front, DF, and Democratic Montenegro said the new cabinet should have both non-party and party ministers.

"New appointments should be agreed … and political parties would nominate their representatives in accordance with democratic standards. On the day of new government's election, a new Prosecutorial Council will be also elected," the press release said.

"In this manner, political issues in the ruling majority would be resolved and the government would be politically strengthened," they added.

He formed his government after three opposition coalitions, For the Future of Montenegro, Peace is Our Nation and Black on White won a narrow majority in parliament in a watershed election in August that ended three decades of rule by the Democratic Party of Socialists, DPS

For months, the pro-Serbian DF,  the largest faction in For the Future of Montenegro, has been demanding a reshuffle, bringing in new political figures, accusing him of poor coordination with the parties that back him in parliament in the appointment of police officials and drafting of laws.

While Krivokapic has resisted a radical shakeup of his non-party cabinet, the DF has upped its game and began boycotting parliament in June. The crisis deepened on July 27, when Democratic Montenegro refused to elect a new Prosecution Council, accusing other partner parties of promoting their candidates.

On Thursday, the smallest member of the ruling majority, the civic...