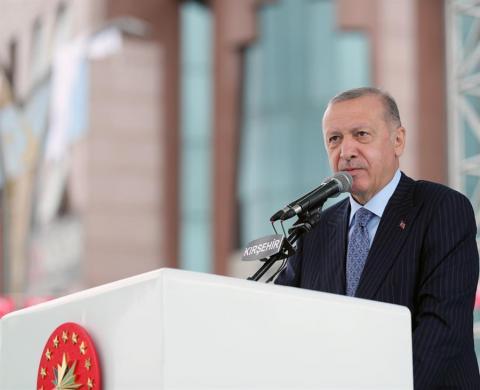 "You can also see the latest developments in the economy. We have reached the highest growth figures in the world. We are breaking record after record in exports. Employment has exceeded [that of] even before the pandemic period," he said at the inauguration ceremony for the 2021 UNESCO Ahi Evran anniversary year.

Turkey has been struggling with the COVID-19 outbreak and has negatively been impacted, but the government has taken measures to support tradesmen since the first day the disease was spotted, he said.

The government has provided business loans and commercial credit card support through Halkbank, he said, noting that some 760,000 tradesmen used approximately 19 billion Turkish Liras of loans with reduced interest rates.

The total loan amount used in 2020 reached 43 billion liras, while the government provided 17 billion lira loans to 140,000 tradesmen and craftsmen as of the end of August in 2021, he said.

"We made it possible for our tradesmen, who could not do business due to the pandemic, to be registered as force majeure in their credit registries. We have simplified the terms of benefiting from loans," he said.

The government has provided grant support of more than 5 billion liras under the title of income loss support. In total, it has paid over 4.3 billion liras, Erdoğan said, noting that they also stopped the enforcement and foreclosure proceedings.

The government has extended the annual income tax, declaration and payment period and postponed social security premium payments, while reducing the VAT rates to the minimum level, Erdoğan said.